Fura Gems just unveiled “Estrela de Fura,” a rough 101-carat, gem-quality ruby that’s being described as a “once in a century” discovery. The company’s chief executive believes the rough gem, which was unearthed in Mozambique, could eventually yield a faceted stone weighing 50 carats or more.

Dubbed ‘Estrela de Fura’ (‘Star of Fura’ in Portuguese), the gem-quality ruby was recovered in Mozambique on July 24. The gemstone has a vivid red hue, fluorescence, and high clarity, Fura Gems says, adding that it believes the stone to be the largest gem-quality ruby on record.

“This discovery is an unprecedented occurrence and a moment of honour for us at Fura and for Mozambique,” says the mining group’s founder and CEO, Dev Shetty. 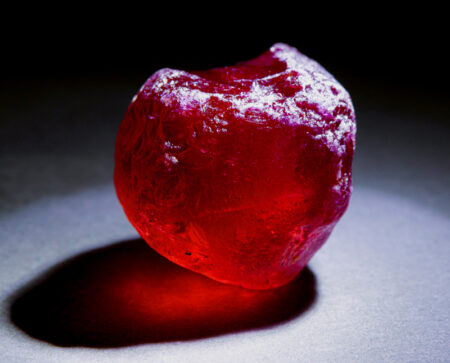 For the next 45 days, Fura Gems, which is billing Estrela de Fura as “the world’s largest gem-quality ruby ever mined,” will be setting up appointments for potential buyers to view and assess the stone at the Dubai Diamond Exchange. Shetty has claimed that the potential buyer could represent a cutting house, jewelry brand, collector or even a museum. A private auction is set to take place in October.

“In 2015, a similar ruby was auctioned by Christie’s, called the ‘Sunrise Ruby,’” Shetty says. “It was a 25-carat polished ruby and sold for over $1.2 million a carat. The prices of rubies have since doubled, so one can guess what the price of a gem quality ruby over 50 carats would be.”